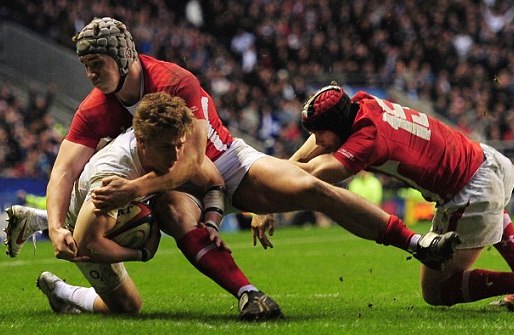 LONDON, ENGLAND – If you watched any of the games this weekend, you saw perhaps two of the best games of the RBS Six Nations so far.  The French played poorly, which kept the Scots in it and England played well, while Wales had a mediocre game.  Two games that were separated by 13 points total;  It was a great weekend for close games that both came down to the wire.

Within the last 5 minutes of the England/Wales game is where I really want to focus.  Just after the try, England kicks down-field and watching it in slow-motion, the ball comes off the Welsh winger, who swatted it to touch and…  DELIBERATELY.   This, without question, should have been at least a Yellow Card and most likely a penalty try. Which essentially would have tied the game for England. It was missed, however, simply because it was in a place where no official had a decent view of the incident. That happens. But it brings up the question of should the TMO’s powers be extended?

The next big issue(s) of the game came with the build up to the try. Directly at the next line out, there was a penalty on the five meter line for side entry at a maul. The next series saw a penalty for sealing off. Finally,  there was a third for collapsing the maul. Three penalties in under 3 minutes all in the red zone! Problem? YES! Where is the card here? There had already been one card for infringements close to the line earlier in the game! Steve Walsh dropped the ball in terms of player management at this point.

Lastly, the try that wasn’t should have resulted in a penalty? Indeed, the playback verified that England did not have a try but why didn’t Referee Walsh go back for a penalty? Listening to the playback, under the roar of the crowd you can catch the call “Advantage over.”  Why?  It is simply a double standard; the backs have a scoring opportunity so it’s over,  but if it had been within the forwards – just picking and driving – the advantage would have been a penalty if they didn’t score.  The advantage should have stood as well as a Yellow Card being shown!  Once again, Wales win on a controversial decision.

I leave you with a question:  There were two law mistakes in the Ireland/Italy game.  One happened almost right after the first whistle and the second about 30 minutes in. Did you catch them?

Tune in next week to find out what they were and catch a review of all the controversy in the Ireland/France game.