LONDON, ENGLAND – After last weekend’s controversy, this week was fairly uneventful.  Well, for the most part… We had a game get called off by the referee  (rescheduled for March 4th), saw a referee make a slight mistake, witnessed three more cards and had a field with red lines.

When looking at the France/Ireland game one thing can easily be said: People should have seen it coming. The weather has been cold as can be for the past week, as in below freezing.  The field was said to have started freezing even while they were playing Italy.  The weather had not gotten any better since then, so why wasn’t the game called off earlier in the week.  To leave a decision like that up to the referee for that level of a game is outrageous.  The referee made the call 10 minutes before kickoff! This situation should have been foreseen; you have people traveling from all over Europe to go to this game and then 10 minutes before the game is due to start it’s called off?  I’m not at all saying it should have been played – it just should have been called off much earlier.

The other thing that was slightly odd this weekend was a field with red lines.  We watched the England/Italy game and there were not white, but red lines.  This is perfectly acceptable, except for the viewers at home. It was extremely hard to see on the television and could have been done much better. Yellow maybe would have been the better choice.

Now that my rants are out of the way, let’s get to the more important matter at hand: The Referees!

Scotland vs Wales was a great game… for the first half, in terms of the score.  Yet, it seemed that the referee, Roman Poite, was very cautious around the tackle.  He seemed to favor the attacking side, which is not always a bad thing, but he didn’t seem to call it consistently in terms of how quickly he wanted compliance.  He did make one mistake, which I wouldn’t blame him for.  There was a knock-on… that wasn’t. The player actually recovered it very close to the ground after fumbling it but from Poite’s position, I can easily see how he could have thought it was a knock-on. 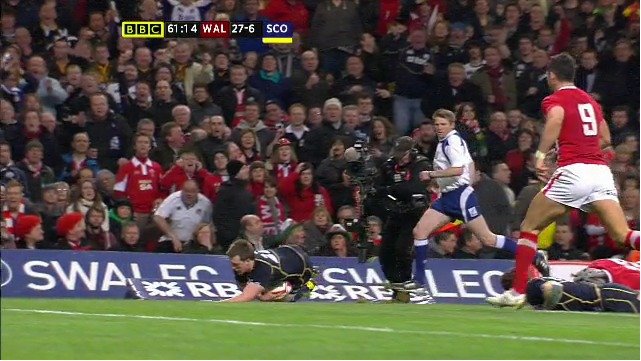 As for the two cards awarded to Scotland,  I can’t say they weren’t warranted, the late tackle on the kicker was completely unacceptable and at this level there was no choice but to Yellow Card.  This was also the case with the off-side tackle for the second Yellow Card, simply a professional foul that needed to be disciplined.  The one to Wales was also completely warranted, as they had been warned and this had already been a threat.

As to the last one, the question came to my mind of why was Scotland not allowed to go quickly after the Yellow Card?  By the law’s definition he was allowed to substitute, but in the future I would like to see a substitution not be allowed.  A team should not be able to put on fresh legs while having to lose a player, leave it to the next stoppage.

Overall, the ref for Italy/England did well considering it was his first match, but Roman Poite did not follow form from the past weekend.

But enough from me, what are your thoughts on the refs last weekend?